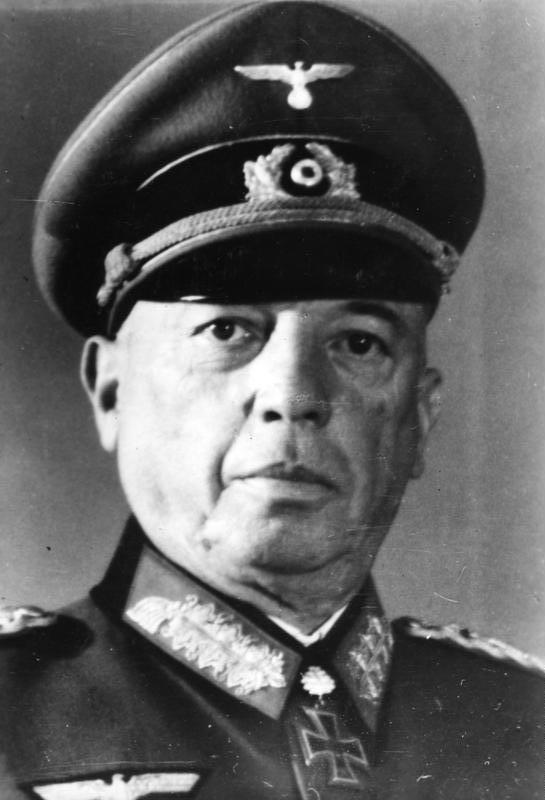 Georg von Kuechler was born on 30 May 1881 year at Philippsruhe Castle near the city of Hanau. From an early age he was prepared for future service in the army. As a young boy, he entered a cadet school, and already at the age of twenty, having obtained the rank of second lieutenant of artillery, he joined the army.

On the fronts of World War I, at first he fought in Western Europe as a battery commander. For his achievements, he was promoted to the rank of captain and from that time until the end of the war he served in various German units as an officer of the General Staff..

After the defeat of Germany in the First World War, he joined the Reichswehr, where he was regularly promoted to higher and higher ranks. After Hitler came to power, von Kuechler was noticed by the new leader and the pace of his military career increased significantly.. A year was a great moment in von Kuechler's life 1937, when he was promoted to the rank of general of artillery, and in addition, with the promotion, he was given command of the 1st Army Corps and became the head of the 1st Military District. Just before the outbreak of World War II, he was given command of the army formed to fight with Poland 3. German army.

He fought at the head of this group during the September campaign, when is his army, which is part of the Army Group “Midnight” General von Bock, the task was to eliminate Polish resistance points in northern Mazovia and thus cover the entire operation from the side of East Prussia. One hundred percent met Hitler's expectations.

At the end 1939 General von Kuechler received command of 18. Army, which he would lead to victories in the campaign against France. Indeed, it did a great job. His grouping very quickly liquidated the Dutch and Belgian resistance movements, opening the way for the rest of the German army deep into the country under attack. After seizing Antwerp, it was directed south with the task of conquering the French capital. His troops entered Paris 14 June. Ultimately 18. The army ended the war in the Pas de Calais area, having previously circled Dunkirk. As a reward for his incredible achievements, General Georg von Kuechler was promoted to the rank of Colonel General.

He took part in the operation “Barbarossa”, together with his grouping in the Army Group “Midnight”, under the command of Field Marshal Wilhelm von Leeb. Shortly after the defeat in Moscow, von Leeb gave command of his Army Group, and this position 17 January 1942 year fell to von Kuechler, very much liked by Hitler. An extremely difficult task was set for the new commander – the capture of Leningrad. The city was besieged by Georg von Kuechler's army for almost two years, still trying to get the Soviet redoubt and being forced to repel more and more offensives of the Red Army. In the meantime, despite the constant stagnation near Leningrad, Hitler appointed von Kuechler as field marshal. Soon the situation became critical and the Wehrmacht's capabilities were exhausted. Field marshal von Kuechler was forced to withdraw his troops, what happened 17 January 1944 year. Hitler, furious at failure, blamed his field marshal for the defeat of the German troops and on the last day of January dismissed him from the post of commander of the Army Group “Midnight”

Field Marshal von Kuechler spent the rest of the war retired. He was arrested by US troops after the capture of Bavaria. Having been accused of war crimes against humanity, stood before the United States Military Tribunal in Nuremberg and in October 1948 received a prison sentence to 20 years. However, after three years, the sentence was lightened to eight years. Von Kuechler was finally released in the year 1952, having spent five years in prison. The reason for his dismissal was illness and old age. He holed up in his apartment in Garmisch-Partenkirchen and did not perform in public until the end of his life. He died there 25 May 1968 year.