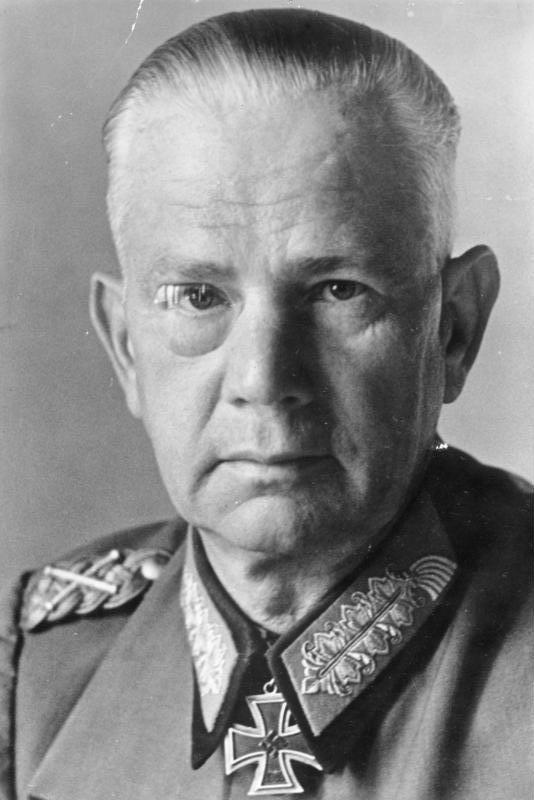 Walter von Reichenau was born 8 October 1884 year in Karlsruhe. His adult fate was significantly influenced by fact, that he was the son of a distinguished Prussian general. At nineteen, Reichenau joined the tsarist army, where he began his service as an artillery officer in 1. artillery regiment. Already in 1904 year he received an officer rank (supporter). He was not promoted until nine years later, when, after completing three years of study at the Military Academy, he was promoted to the rank of lieutenant.

During the First World War, he initially served as an adjutant in 1. Artillery Regiment. Still in 1914 He was promoted to the rank of captain and directed to the General Staff 47. Reserve Infantry Division. Then he served in the staff 7. School Cavalry Division. For his services during the First World War, he was awarded the Iron Cross of the 1st and 2nd class (both in 1914 year).

After the war, he remained in the army, joining the Reichswehr – armed forces of the Weimar Republic. There, at first he was an officer in the General Staff of border divisions in Pomerania and Silesia. In year 1920 he was transferred to the line service, however, five years later he became a staff officer again. In the meantime, in year 1924 received the rank of major, 5 years later, he would be promoted to the rank of lieutenant colonel and take the position of the head of the inspection of communications units. He held this position until 1931 year, when he was transferred to stationed in Królewiec 1. Infantry Division, which 1 February of the following year he became chief of staff. While still in the same eye, he took the position of chief of staff of the Military District in Königsberg.

When it slowly became clear, that Hitler will soon take power over Germany, Lt. Col.. von Reichenau began to zealously declare himself a supporter of National Socialism, perhaps influenced by his uncle Friedrich, fanatical Nazi. This attitude has paid off – right after Hitler came to power, 1 February 1933 Reichenau assumed the role of the head of the office of the Ministry of War of the Third Reich. A year later he received the rank of general and became one of the most important figures in the German army. In years 1933-35 he was the head of the Reichswehr and Wehrmacht Management and was a personal adviser to the then Minister of War, Werner Blombeg. His undisputed support for Hitler von Reichenau showed in the eye 1934, when in June he persuaded his fellow officers to swear allegiance to the Fuehrer and took part in the so-called. “night long knives”, when it at night on 29 i 30 On June, SA, which was opposed to Hitler, fell victim to the conspiracy.

Then there were only promotions. 10 January 1935 he became a lieutenant general and took command of 7. Army Corps stationed in Munich. W 1936 He was promoted to the rank of artillery general and appointed commander of the VI Military District based in Munich. Two years later, he took command of the 4th Army Group based in Leipzig. W 1939 year he was appointed commander of the German 10. Army.

He commanded his army during the September campaign. His task was to lead the main attack on Warsaw. During the military operations in Poland, he committed many terrible crimes against the civilian population. For his merits 1 October, he was promoted to the rank of Generaloberst and received (among others) Knight's Cross of the Iron Cross. During the French campaign, von Reichenau commanded 6. Army, which was supposed to carry out an effective offensive against Belgium and the Netherlands. As a reward for extraordinary achievements, he is promoted to the rank of field marshal.

6. The von Reichenau army was also in command during the operation “Barbarossa” w 1941 year. He was the perpetrator of the high-profile massacre of Jews in Kiev in September. 1 December was appointed, as von Rundstedt's successor, commander of the German Army Group, which was attacking Ukraine “South”. In the initial phase of the fighting for Stalingrad, he was in command 6. Panzer Army, however, he lost this function after defying Hitler's orders and the withdrawal of his army from the Don. Soon after, 15 January 1942 von Reichenau suffered a heart attack. He died two days later.