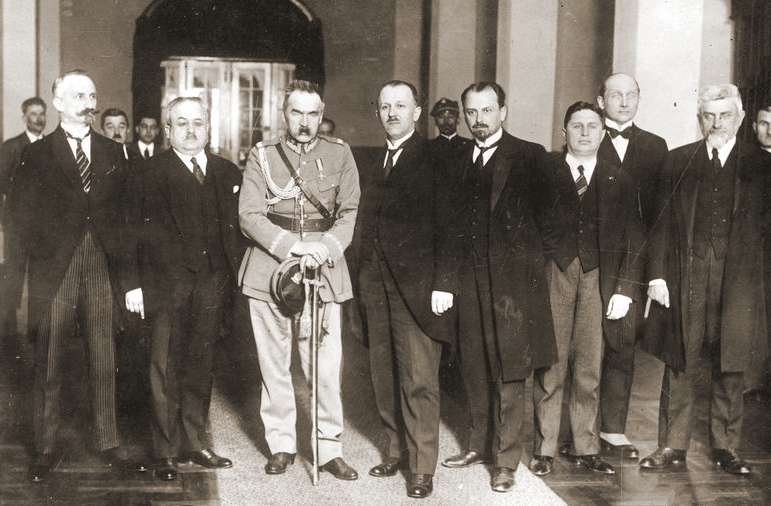 With Wojciechowski's abdication, Marshal Rataj took over power in the country. This, of course, complied with the wishes of the Belweder Palace (i.e.. from then on Piłsudski), and appointed Kazimierz Bartel as head of government, professor at the Lviv Polytechnic. Teacher, recently a liberator, then the founder of the radical intelligentsia labor party (with Thugutt 6 deputies) full of faith in his mission, used the first orders, to calm the waves of unrest and restore order. A few weeks passed amid widespread expectation and amazement. Krakow's "Time", who condemned the Rokosz, he noticed quickly, that there will be no social revolution, so he hit tons of reconciliation. Ignacy Daszyński was very disappointed, who thought, that Piłsudski would now stand as a proletarian dictator. But it was still far from sobering up. Piłsudski faced two issues: how to conquer a nation after the hecatomb of blood and how to rule in transition, until he had created the program himself, nor did it have an administrative apparatus, when the country expected miracles from him. He issued an appeal to the army with an expression of hope, that God will turn away from "us" the punishing hand for bloodshed. He could count on one thing: that neither the left, neither will his right hand throw stones at his feet. "Military democracy" recently so critical of the reactionary aspirations of "Chjenopiast", not knowing yet what kind of freedom the marshal is cooking, she proclaimed the "moral recovery" of Poland. The culprits were searched. Generals Malczewski were imprisoned, Rozwadowski, Jaźwiński, Żymierski and the head of aviation, Zagórski, considered the most dangerous man, because he knows the secrets of Piłsudski. Then, under the leadership of Moraczewski and Adam Skwarczyński, press attacks on the alleged thieves of the public penny began. The result of this campaign will be an extraordinary commission to fight abuses, which detected nothing and became ridiculous.

It was to choose Wojciechowski's successor – they were the same chambers, who had just trusted Witos. How to elect a suitable president in them? Everyone predicted, that Piłsudski would like to return to the position of head of state. Day [29] May invited the leaders of the clubs for tea, to tell them the words of truth. All but the nationalists came – and everyone heard the provocative allocation: that "in Poland, the interests of the individual and the party prevailed over everything, there was impunity for abuses and crimes ". The Marshal will try to “rule without a whip, but he will make war to the shouts, to the bastards, murderers and thieves ". “Do with my candidacy, what do you like ". "An elect must have honor above the desire to earn a few dozen pennies". Each word was full of meaning: was an accusation, an obligation or a demand. Stunned guests brought them to their clubs. National democrats recognized, that voting for Piłsudski would sanctify the crime; Piasts with resignation, that the victorious resident must be left the responsibility and the burden of ruling ... the day 31 May fell in the Congregation 292 voices 28 on Piłsudski (left, part of the center, Germans and Jews) the right hand and the rest of the center gave up 193 cards after Adolf Bniński, the voivode of Poznań; 61 cards were invalid. Most of the dozen or so votes above the legal set – it resembled Narutowicz's choice. Among the joyful demonstrations, the winners heard, that Piłsudski did not accept the choice, because he wouldn't have enough power as president, anyway, he regards the election as legalizing the coup, On June, the National Assembly was held again. The Endecs thought about Bobrzyński, but they persevered with Bniński (200 votes); 271 Ignacy Mościcki received the votes, professor at the Lviv Polytechnic, an outstanding chemist, once a member of the London PPS centralization, a candidate whom Piłsudski did not suspect of "a desire to earn more than a few dozen groszy." And Bartel remained prime minister in the first cabinet appointed by him, Piłsudski appointed minister of military affairs, August Zaleski was to be in charge of foreign affairs, education Mikułowski-Pomorski, justice prof. Wacław Makowski, the treasure of Czesław Klarner, industry Eugeniusz Kwiatkowski. The color of the office was red, it could be liked by radicals. It seemed, that this cabinet will hold elections, as soon as the chambers dissolve themselves by their own resolution, which in the post-tea mood seemed likely, but Piłsudski did not want an election yet. His immediate intention was to gain more power legally, even more with grabs, humiliate opponents and ridicule the national representation.