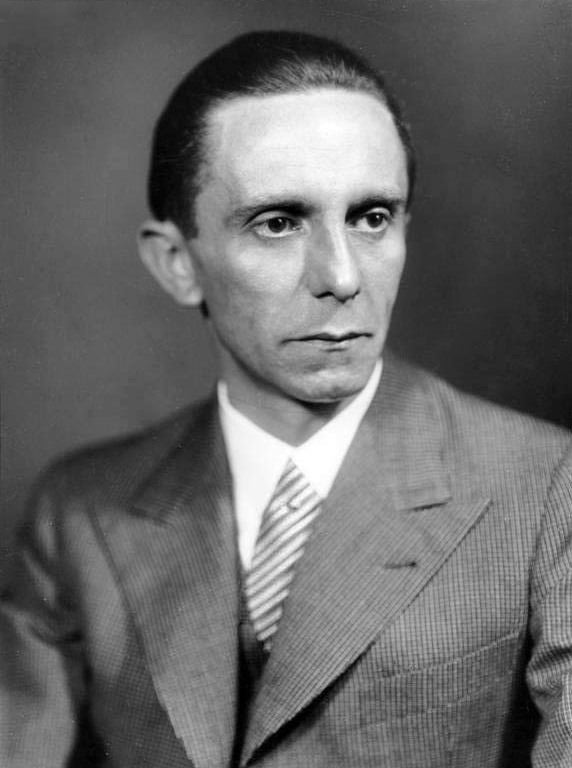 Joseph Goebbels, the son of Friedrich and Marian was born 29 October 1897 in the small Rhine town of Rheydt. He had four siblings: two brothers and two sisters. In early childhood, he was diagnosed with a serious bone marrow disease, as a result of which there was a physical handicap of the future minister of propaganda. Major surgery did not help, which he passed at the age of seven – Goebbels' body did not grow to normal size and his left half was smaller than the right half for the rest of his life. However, thanks to this, he avoided conscription during the First World War (only from June to October 1917 year he served in the local staff “Patriotic Aid Units”).

Young Joseph was passionate about literature. After graduating from the Catholic parish school and gymnasium in his hometown, he received a scholarship to study at a university. He studied at eight universities. He earned a doctorate in literature and philosophy. He wanted to become a famous writer, however, his creative attempts (an autobiographical short story and two plays) to no avail. Broken down, he began to believe in the Jewish conspiracy and was fired with great anti-Semitism.

W 1924 year (or in 1922, as he later claimed) Goebbels joined the NSDAP. However, on national-socialist issues he was more of a socialist, than a nationalist; he stuck to the left-wing faction of Georg Strasser, departing from Nazi ideology. After a while, he began to go to extremes, even went so far as to say, that “it is better to complete our days in Bolshevism, than under the yoke of capital”. It ended with a clear opposition to Hitler: “I demand, that the petty bourgeois Adolf Hitler was expelled from the party!”. The resistance ended with the disciplinary calling of Goebbels to Munich “rug”. There he had a long conversation with Hitler, which became a turning point in the life of the future minister. He capitulated, charmed by the party leader. “Hitler spoke for three hours… So clear, so brilliant… I love him…”, he recalled the conversation. From then on, Goebbels was a fanatical Nazi, following the wishes of his leader. He broke up publicly with Strasser and became a close associate of Hitler. Already in 1926 He took the office of the head of the Berlin district of the NSDAP, and two years later he became the head of the party's propaganda.

W 1931 He married a divorcee, Magda Quandt, and took custody of his stepson Harald (Magda's only child who later worked in the Luftwaffe, who survived the war). In his private life, Goebbels was a real debauchery and a toy. He loved to organize libations, he often had romances (w 1938 after a loud incident with actress Lida Baarova, his wife left him; however, she returned to her husband at the urging of Hitler).

Hitler made his success of the year 1933 he owed it to Goebbels. As a reward for his efforts, he offered him the office of the minister of propaganda and information in the new government, in which position Joseph Goebbels displayed his enormous talent every now and then. He completely controlled all media, intelligently selected information to the ears of the German people. He manipulated society in a brilliant way, instilling in him “right ideology” and by doing, that even in their worst moments of defeat, they believed in victory (famous speech from 18 February 1943 year, which one it is, delivered after the defeat of Stalingrad, she awakened the hearts of his countrymen). He was no stranger to artificial candles, half-truths, staged rebellions, provocations, or lies. He was a great speaker, able to convince every human being. His quotes are known “A lie repeated a thousand times becomes the truth”, whether “The bigger the lie, the easier it is for people to believe them”.

Hitler, seeing the effectiveness of Goebbels' actions, he decided in 1943 year to appoint him to the position of Reich Plenipotentiary for. total mobilization.

Goebbels did a lot for the Third Reich and Hitler. As a reward, The Fuehrer in his announced will 30 IV 1945 appointed him Chancellor of Germany after his death. However, Goebbels did not hold this office for long. A day later, he decided to follow in his leader's footsteps. He and his wife put to sleep with morphine and killed six of their children with potassium cyanide, after which he gave an order to shoot himself and his wife.

So the official date of Goebbels' death is day 1V 1945 year. However, reportedly just before his death, he conducted secret negotiations with the Soviets to establish the details of his family leaving Berlin secretly. Could it be another unsolved mystery of the last days of the Third Reich?