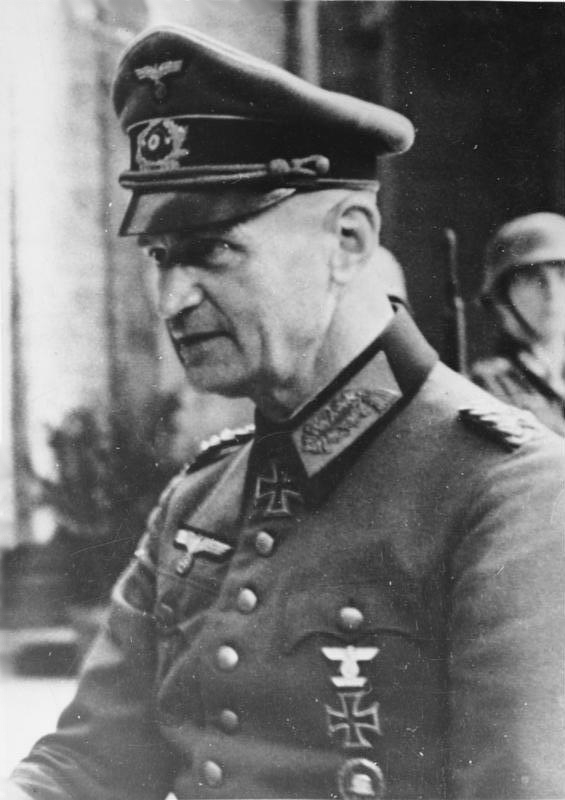 Johannes Blaskowitz was born 10 July 1883 year in Peterswalde. Already in his early childhood, he showed an extraordinary interest in the military, which soon resulted in young Johannes joining the army. Blaskowitz served his military service in Ostróda, where he earned the rank of lieutenant.

During the First World War, he commanded a company at first, and later became an officer of the General Staff in France and South Tyrol and the Baltic States. After the surrender of Germany, he did not leave the army, but he continued his adventure with the military, serving in the Reichswehr. Tam, commanding both linear units, and staffs, he had a brilliant career. From the commander 14 Infantry Regiment was soon promoted to the position of military commander in Baden. At the beginning of the year 1933, Major Blaskowitz was appointed inspector of Military Schools. While 1 April 1935 year, already in the rank of general, began to command the Second Military District. The same year he took command of the 2nd Army Corps in Szczecin. The crowning achievement of everything was Hitler's appointment of Blaskowitz as commander-in-chief 3. Army Group in Dresden (it covered the armed annexation of Austria and Czechoslovakia).

During the September campaign, Johannes Blaskowitz commanded the German 8. Army, designed to protect the north wing 10. An army going with the main strike. For his services in the war against Poland, he was honored by Hitler with the Iron Cross. As an army commander, This time 9., he returned to the front during the German invasion of France. After the victorious campaign, he was appointed the Commander-in-Chief of the Military there. Dismissed from the position of commander 9. Army, was promoted in October 1940 year for the position of leader 1. Army, remaining in the west of the continent for cleaning purposes. He held this role for 4 patch.

Finally 12 May 1944 year, Johannes Blaskowitz was appointed commander of the newly formed Army Group ?G?, whose task was to defend the Biscay front, in southern France. Soon, after the allied landing in that area, he was forced to withdraw deep into the continent with his troops.

Blaskowitz's last important role in the Second World War was in command of ?Fortress holland?, which he defended by refusing all offers of surrender.

After the defeat of the Reich in 1945 year, Blaskowitz was taken prisoner. At the beginning 1948 years he was accused of war crimes, during the trial of the High Command of the Wehrmacht. Before reading the indictment, he committed suicide, jumping out the window of the Nuremberg Palace of Justice.

On the occasion of discussing the figure of Johannes Blaskowitz, it is worth paying attention to the fact, that he was one of the most moral German commanders. He opposed the humane treatment of prisoners of war, trying to provide them with the best possible conditions at all costs. also, as a devout Christian, he felt responsible for all murders and exterminations committed by the Germans. He protested against the criminal actions many times, committed by the SS, conducted mainly in Poland, on Polish Jews. He exposed himself to Hitler many times by his manifestations of humanitarianism.