Instead of rebuilding Poland – new division 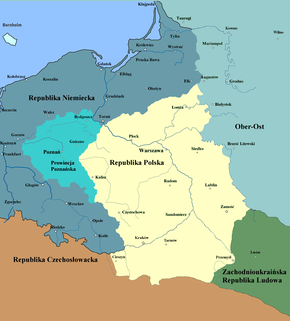 NKN commemorated the "liberation" of Warsaw with an appeal "to the nation" (8 VIII) with a demand to unite an undivided Kingdom with an undivided Galicia, and sent appeals to the capital with the motive "Speech Warsaw". However, the city as a whole remained mute, and the Austrian censorship confiscated the resolution of the Polish Circle, declaring for Polish statehood in connection with Austria-Hungary. The legions were not allowed to enter Warsaw, and when Piłsudski traveled there privately in a carriage, The German commandant ordered him to leave the city immediately. However, Chancellor Bethmann-Hollweg did preach in parliament, that German promises were worth more than slippery Russian promises, and he made restrained announcements […] in the Kingdom, administration with the participation of the population and the free development of national life, the Reich's central economic unions more powerful than it 20 May [1915 r.] secretly planned another solution to the Polish question, namely annexation 80 000 km2 of Congress Poland (gub. Suwałki, Płocka, Kaliska, Piotrkowska, Warsaw and half of Łomża). It would be a comeback, more or less, to the limits of the third partition, only this time, according to hackatistic concepts, Prussia was to get the Land ohne Leuteejedis Slave, as in the days of Margrave Geron. Tsarism could not accept such peace, if it wasn't going to collapse completely: he had to fight on, on the newly created front line stretching beyond Vilnius, Minsk, Pińsk i Luck. Mikołaj Mikołajewicz's vague promises were renewed, not resigning from restoring the pre-war state of affairs on the Vistula River, i.e.. Russification. So, for the duration of the war, Berlin and Vienna divided the gains by a fiscal and police cordon in this way, that Częstochowa and Zagłębie Dąbrowskie stayed under the picelhaube, but Piotrków, Radom, Lublin – under the black and yellow banner. The general-governor of Warsaw was the conqueror of Antwerp and Modlin Beseler, not deprived of political abilities and ambitions, and directly dependent on Emperor William. His secondary colleague in Lublin was gen. Diller, and after him Kuk. Beseler was half as greedy as these economic factors, because he only demanded 35 and a half thousand. km2. The first task of both was to suppress these symptoms of independence which the population had gained. In Warsaw, before the departure of the Russians, the Central Civic Committee was formed with Fr.. Zdzisław Lubomirski at the helm; the city itself tried to administer the president with a local committee. Civil courts were improvised 3 instances and the militia to maintain order. This state of affairs proves the state-creative abilities of Poles, it did not correspond to the secret intentions of the German government. The Germans themselves were sent to higher positions, the administration was detained in the hands of the military "Kreischef", civil courts have been collapsed, militia and the Central Committee itself. It was a little better during the Austrian occupation, where many Poles were allowed to work. Later, in both occupations, the local government was expanded to follow the German or Austrian model, no elections yet. The prince president, adhering to the adamant attitude towards the occupiers, behaved with dignity, and when the elected Warsaw city council finally got together, she picked up (July 1916 r.) immediately the slogan of independence. [The implementation of this slogan] it depended on the struggle of war and the endurance of society. And one had to endure hard trials: both occupiers drained the country, The Germans were destroying the industry on a planned basis, they were taking workers to the Reich, they gagged the press with severe censorship. An undoubted achievement of Polishness was the University of Warsaw, opened under the control of Berlin, headed by Rector Józef Brudziński.