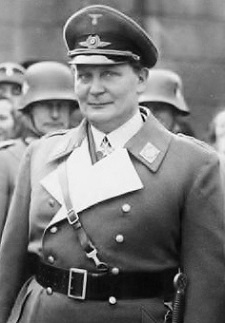 Hermann Goering, son of Heinrich and Franziski was born 12 January 1893 year in the town of Rosenheim in Bavaria. His father was a retired cavalry officer and a high-ranking civil servant, and it was he who passed on to his son military traditions. The young Hermann began his studies at the Military Gymnasium in Lichtenfelde near Berlin, and after graduating, he entered the Cadet School in Karlsruhe. As her graduate, having practiced and received v 1912 the rank of lieutenant, began his military career in the service of Prince William.

W 1914 year, at the beginning of the First World War, he was assigned to the infantry, which he, however, soon had to leave as a result of illness, preventing further field service. He was transferred to aviation, where in the period from June to October 1915 he flew as an observer in various reconnaissance and bombing missions. Having finished his aviation course in October, he has been flying fighter ever since. 7 June 1918 received command of 1 a hunting regiment, whose activities he directed until the end of the war. During the entire World War I, he shot down 21 aircraft, earning the title of ace. For his achievements, he was awarded the Iron Cross 1st class and the prestigious order of Pour le Merite.

W 1921 year, Goering enrolled at the University of Munich. There he met Adolf Hitler. Goering, having caught the ideology of the future leader, so he opposed the Versailles agreements, that he refused to serve in the Reichswehr, a w 1922 year he joined the NSDAP. Soon he was appointed chief of militia SA, at the head of which he participated in the Munich coup of the year 1923, in which he was injured. Forced to flee the country, got to Austria, on the way out he was relegated to the rank of ordinary SA officer (However, he was later promoted to the rank of Gruppenfuehrer, which he held for a year 1945). His wounds in Munich were painful for the rest of his life, as a result he became addicted to morphine (from which he was cured of addiction only after the war, not having access to it in a Mondorf prison).

Hermann Goering returned to the country in a year 1927 and immediately renewed contact with Adolf Hitler. As an MP from the NSDAP list, he obtained in a year 1928 mandate w Reichstagu, and four years later he became the chairman of the German parliament. After Hitler came to power, he obtained the post of minister of aviation in the new government. Together with this office, Hitler offered him the function of Prime Minister of Prussia. In the same year, Goering founded the Gestapo and organized the first concentration camps – in Oranienburg and in Papenburg. Together with Himmler, he led the activities of special services during the so-called. “night long knives”. A year later, he was nominated for the position of the commander-in-chief of the Luftwaffe.

From that moment on, Goering began to undertake intense activities aimed at preparing aviation for the war. New airports were built, airplanes were constructed. W 1937 He became the head of a specially created large mining and metallurgical concern, tasked with supplying factories with raw materials. Hermann Goering turned the Luftwaffe into a real power. In September 1939 In the last year, the Wehrmacht was able to deploy nearly four thousand machines and as many well-trained crews.

For his success during the September campaign and the campaign in Western Europe, Hitler appointed 29 June 1941 In the year of Goering, the position of Reich Marshal was created for him. It was the highest military rank at the time, giving Goering absolute power over German troops. also, The Fuehrer appointed him his formal successor and awarded him with the Great Iron Cross.

During the war, Goering studied almost all aspects of the Reich. In addition to military and economic matters, it also had an impact on propaganda and internal security. He had a great part in “the final solution of the Jewish question”.

Goering loved glamor and extravagance. He wore uniforms specially made for him, he held big balls, he had a huge one, beautiful residence (which he blew up 20 IV 1945 years of fear, so that it does not fall into the hands of the Allies). He collected works of art from all over Europe, he paid the artists, to create for him. He treated himself in an aristocratic manner, wherever he could show his fortune.

Goering's star began to fade after the defeat of German aviators in “the Battle of Britain”, when they were unable to successfully oppose the Allied Air Force. From that moment on, he gradually fell out of favor with Hitler; holed up in his residence and rarely appeared in public. The event of the day was the height of Goering's folly 23 April 1945 year, when, in the face of imminent defeat, he proposed Hitler to power in his telegram. The Fuehrer took this as an act of embezzlement and betrayal and ordered his minister to be arrested. In his will, he deprived Goering of all state functions, including the promised succession.

After the entry of the Allied forces, 8 May 1945 he voluntarily surrendered to American captivity, hoping to fulfill the role of the German-Allied mediator. Unfortunately, the course of events did not go his way; he was imprisoned in Mondorf, and was sentenced to death by the power of the Nuremberg Military Tribunal. However, 15 October 1946 year, committed suicide a few hours before the execution was to take place, by swallowing a portion of potassium cyanide, which was probably hidden in his pipe.