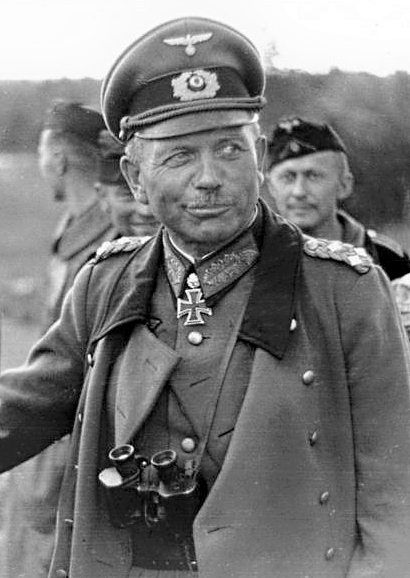 Heinz Guderian was born 17 June 1888 year in Chełmno. His father, Friedrich, he was a professional officer in the Prussian army. Despite this, that the family had no military traditions, decided to choose an army career for his son. Young Heinz already in 1901 year he entered the Cadet School in Karlsruhe. Two years later, he enrolled at the Main Cadet School in Gross Lichterfolde near Berlin. W 1907 he was finally admitted to the army, where he was assigned to 10. Hanoverian Infantry Battalion (whose commander was Guderian's father). April to December 1907 year he studied at the Military Academy in Metz. Having received the rank of lieutenant, he returned to his squad 27 January of the following year. In October 1912 Guderian was transferred to the radiotelegraph company. W 1913 he married Margarete Goerne, who later bore him two sons. In October of that year, he left the company and was sent to the Military Academy in Berlin. He studied there until the outbreak of the war (later, in year 1918 returned to the supplementary course).

Despite this, that Guderian was trained to serve in the light infantry, at the beginning of the First World War he was assigned to 5. Cavalry Division as a radio commander. Then he was transferred to a wireless communications company. So he was rarely on the front line. He was able to get baptized in combat during the battles on the Marne River and in the Battle of Verdun. Tam, bravely fending off attacks directed at his unit, he deserved the Iron Cross II and I class.

After war, Guderian has been in since September 1918 from the following year to May of the following year, the chief commander of the border guard in Berlin, Wrocław and Bartenstein. Then he returned to the headquarters. His career dragged on at an incredibly slow pace. For a year 1915, when he was promoted to the rank of captain, he was not promoted even once. Only in 1922 year something changed in his life – was appointed by the Inspector of Motor Transport Troops to develop ways of using road transport in the event of a possible war. These were Guderian's first steps in the field of tactics. This occupation started his great passion for the automotive industry, tanks and strategy. Since then, he has passionately read works devoted to these aspects of the military, he also wrote a lot himself. He was convinced of the tremendous strength and importance of tanks in combat.

The authorities of that time, seeing Guderian's talent, they appointed him lecturer in military history and tactics at the headquarters. There he earned a reputation as a great teacher. Soon (1927 year) began to teach tank tactics at the Motor Transport Instruction Staff at the Ministry of War. Willing to try my hand also as a commander, after acquaintance, he received command of 5. Motorized Battalion. The next step in Guderian's career was day 1 II 1931 year, when he became the chief of staff of the main motorized inspection unit.

1 IV 1933 year, after Hitler came to power, Guderian was promoted to the rank of colonel. Since then, it has been promoted every year, to 1941. 1 July 1934 He was appointed chief of staff in the newly created Command of the Panzer Forces. Namowy Guderiana, to focus armaments on tanks, they soon encountered a response; w 1935 year, the first three armored divisions were created, and Guderian was entrusted with command 2. God. Panc. Stationed in Wuerzburg.

W 1937 roku Guderian, already as a general and commander of the XVI Corps, published his famous book “Danger – Panzer!”, in which he included the ideas of the tactics he developed “blitzkriegu”, that is, lightning war. Book, commanding the significant value of tanks, was to convince the public and the authorities of the need to create as many tanks as possible. It was thanks to the tactics developed by Guderian that Hitler managed to conquer almost all of Europe.

Guderian commanded German troops during the annexation of Austria and Czechoslovakia. Shortly before the outbreak of World War II, he was appointed Chief of the Rapid Forces.

Heinz Guderian fought at the head of the 19th Corps during the September Campaign and fights in Western Europe. In September 1939 During the year, his unit was arrested by a 720-strong group of Polish soldiers near Wizna. He did better in France, where he brilliantly removed all resistance from the French by raiding his tanks (he was moving so fast, that Hitler even ordered him to slow down, by threatening to withdraw command of the unit).

Guderian showed his excellent tactical skills during the operation “Barbarossa”, When is it, having one rank lower than the field marshal, Commanding his Panzergruppe, Guderian was moving so quickly into the USSR, that he has earned a nickname “Fast Heinz”. For his achievements in July 1941 He received the Knight's Cross of the Iron Cross with oak leaves. 5 October of that year, he took command of 2. Panzer Army, which he brilliantly led to victories. Unfortunately, at the end of the year, his command was taken from him – Guderian, despite Hitler's clear directives, he ordered a retreat to the west, seeing, that the situation, in which the German troops were located was hopeless. Hitler was furious; the issue was aggravated by a conflict with Field Marshal von Kluge. He returned to active service after the defeat of Stalingrad. He was appointed 1 brand 1943 year the Inspector General of Armored Forces, in which he was responsible for the further development of the armored forces of the Reich. According to his own recommendations, he controlled the production of tanks and the training of crews.

21 July 1944 year, the day after the failed attempt on Hitler, General Guderian was appointed head of the OKH, in which position he inspired the rise of the Volkssturm. 23 brand 1945 he was removed from this post by Hitler; The Fuehrer was irritated by the general's persistent appeals to start peace negotiations. Guderian withdrew from public life and left for Tyrol, where he was arrested by the Americans of the day 10 May 1945 year.

Despite the opposition of the Soviet authorities, Heinz Guderian was not tried as a war criminal. After the German capitulation, he was transferred to the United States, where he spent three years in the local prison, as a prisoner of war. Released in 1948 he lived in West Germany, where he died 14 May 1954 years in Schwangau. He published the stories of his life in the book. “Memoirs of a soldier”. Undoubtedly, he was the most outstanding commander of armored forces in history and a specialist in tanks and war tactics..