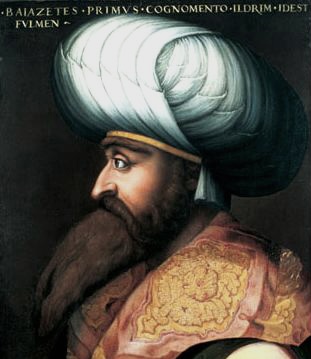 The Turkish state became a real power after that, how Murad I defeated the Serbs in the great battle of Kosovo in 1389 r. Nobody could stop the Turkish onslaught on the Balkans anymore, and soon the Turks captured all of Bulgaria (for Murad's successor – Bejazyda I Błyskawicy), they annexed large parts of Albania and Macedonia and entered, after crossing the Danube, to the territory of today's Romania. Lightning (there. Annunciation) he even tried to conquer Constantinople. In fact, only this city remained in the hands of the Byzantine Empire, not counting an independent monarchy with its capital in Trapezunta and a few meaningless enclaves, and all of Anatolia was incorporated into the Ottoman state. Only a few emirates were able to maintain relative independence. After Kosovo Pole danger hangs over Europe, which mobilized and united the European knights under the banner of defending Christianity. Under the leadership of the King of Hungary, Sigismund of Luxemburg, it suffered a defeat with the Turks at Nicopolis in 1396 r. The road to Europe was opened to Islam.

Unexpected deliverance has come from the east. At the end of the 14th century. Mongolian ruler Timur Lenk (Kulawy), descendant of Genghis Khan, known in Europe as Tamerlan, he united the states of Central Asia and wanted to occupy an even larger area. First, he directed his steps towards Persia and India, then he captured Aleppo and Damascus, and then entered Anatolia. In the Battle of Ankara, St. 1402 r. he defeated the army of Beiazid I and took him prisoner, where he gave up his ghost. Many emirates recently conquered by the Sultan liberated themselves from Ottoman rule, began paying tribute to Tamerlane, and the sons of Beiazid took possession of a small patch of land.

After Tamerlane's death, there was a crisis in the Mongol state, as a result, the plans for Turkish expansion could be revived. Mehmed 1(1413-21) dealt with his brothers and became the Sultan, uniting the divided state. His son Murad II entered the Balkans again and sought a dispute with Hungary. W 1444 r. Europeans organized a relief led by the king of Hungary and Poland, Władysław III, they have failed miserably, and Władysław was mortally wounded. After this battle, the young king was nicknamed Varna. Another battle took place during the reign of Murad II – again near Kosovo Pole (1448) – and Europe has failed again. The revolt against Turkish rule in Albania, however, weakened the impetus to the north. Murad II was succeeded by his son Mehmed II, later called Fatih, that is, the winner, which reigned in the years 1451-81. He became famous primarily for the conquest of Constantinople in 1453 r. – henceforth the end of the Middle Ages dates back (middle ages) and the beginning of modern times, because it was a turning point in the history of the world at that time. Constantinople became the capital of the Ottoman Empire and was renamed Istanbul (pol. Istanbul). Byzantine Empire, a true mainstay of Christianity in this part of the world, ceased to exist, after its more than a thousand years, turbulent history. The Turkish Sultan henceforth saw himself as the successor of the Roman Byzantine Empire and claimed the right to unite all Muslim tribes and Greeks under the Islamic banner, who were memories of the old empire, second Rome.

After a huge success, which was the capture of Constantinople, Mehmed II set out to conquer the remnants of yet independent states inside Anatolia. He defeated the Karamanids (with the capital in Karaman), Turkmen in eastern Anatolia and the last Christian state on this plateau – kingdom of Trapezuntu (1461). He conquered Serbia even earlier, besieged Belgrade to no avail (1456), conquered the Peloponnese and Athens, and also waged a war with Venice. He also directed his steps towards Wallachia and Moldavia, reaching the borders of Poland at that time, and then, without any major obstacles, he subdued the Crimean Khanate.