The sick man of Europe 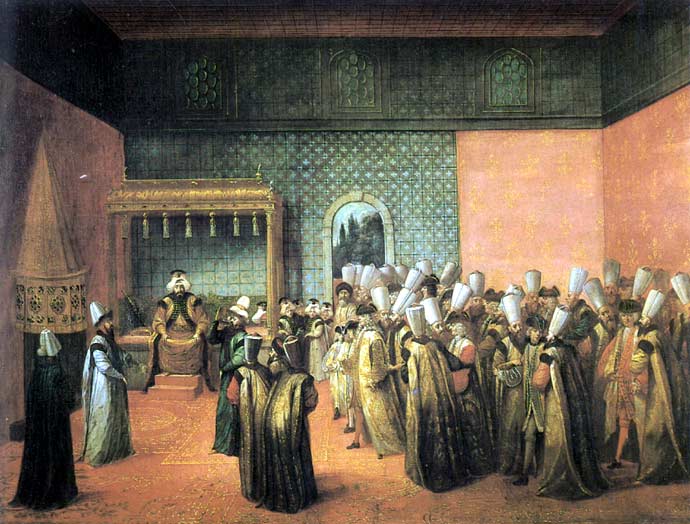 The turning point in the history of Turkey came with the peace treaty in Karłowice in 1699 r. The then reigning Sultan Mustafa II made an expedition to the northern and western fringes of the empire in order to repel Russia, Venice and other countries advancing against the empire, but he was not successful. Therefore, he signed the above-mentioned treaty with these countries as well as the Habsburgs and Poland. The Habsburgs received Hungary and Transylvania, Poland regained Podolia, Russia – Azow, and Venice – fresh prey in the Peloponnese. The concluded peace significantly diminished the authority of the Sultan and the whole country, in which rebellions and uprisings began to spread. Nobody was satisfied with the new situation, and attempts to carry out reforms crashed against the wall of general resentment. W 1703 r. the greatest uprising broke out in Istanbul, bearing the hallmarks of a revolution. Both simple people took part in it, as well as the army and Janissaries, and they all demanded the dethronement of Mustafa II. They appointed his brother Ahmed III to the throne (1703 – 30), after which the troops loyal to Mustafa passed over to his side. During the reign of Ahmed, there was a war with Russia, ended with a truce in 1711 r. Under it, Turkey regained Azov, which was quite a success, but in a war with Venice, and consequently the Austrian Empire, The Turks lost, having lost its foothold in Hungary and Belgrade. The only consolation was to keep the Peloponnese under control. According to the provisions of the peace treaty, Austria was granted trade privileges, which many European countries have already used.

The so-called. tulip period, characterized by the great influence of European countries on culture, art, science and general development of Turkey, indirectly through the unimpeded flow of capital, but also through the court itself, who wished to follow an example from the lavish life of European courts. The name comes from the Dutch tulips that were popular in the empire at that time – their holiday was once organized in Istanbul. But not only Europe, but also the east – Persia and China – played a significant role in promoting new patterns. Several reforms were carried out in the country at that time; unfortunately, they only improved Turkey's overall condition for a while, or rather its treasury.

In years 1723 – 46 there was a war with the Persians, which was carried on with variable luck, and the concluded peace actually confirmed the state from before the war with Turkey's minor losses. As a result of the disasters, it broke out in a year 1730 the so-called. the rise of the red turbans in Istanbul (because his followers wore turbans of that color). Again, the lower social classes took part in the uprising, along with the army and the Janissaries. After Ahmed III gave the rebels the vizier and other dignitaries, the population set about plundering the homes of the rich. Eventually, the sultan relinquished the throne, and he was succeeded by his nephew – Mahmud I (1730 – 54). W 6 years after the "red turbans" movement, war with Russia and Austria broke out. Russia captured Crimea and part of Ukraine, and also Moldova, Austria struggled with a weakened Ottoman Empire, surprisingly, unsuccessfully. Turkey was still able to put up strong resistance, and the peace treaties were extremely favorable to her, for it has not lost any territories. Another war with Russia broke out in 1768 r., after a period of relative peace. The reason was that the Russian troops crossed the Turkish border. They were chasing the Confederates, that is, opponents of King Stanisław August Poniatowski, imposed by Moscow. Because Turkey was Russia's enemy, she had a convenient excuse, to make a war with her. The Turks lost (the Russian fleet even took to the waters of the Aegean and the Mediterranean), and under the concluded peace treaty, the Russian state received huge areas of Ukraine and allowed its fleet to move freely in the Black Sea. It was then that it began to spread, used in some courts much earlier, defining Turkey as "the sick man of Europe".