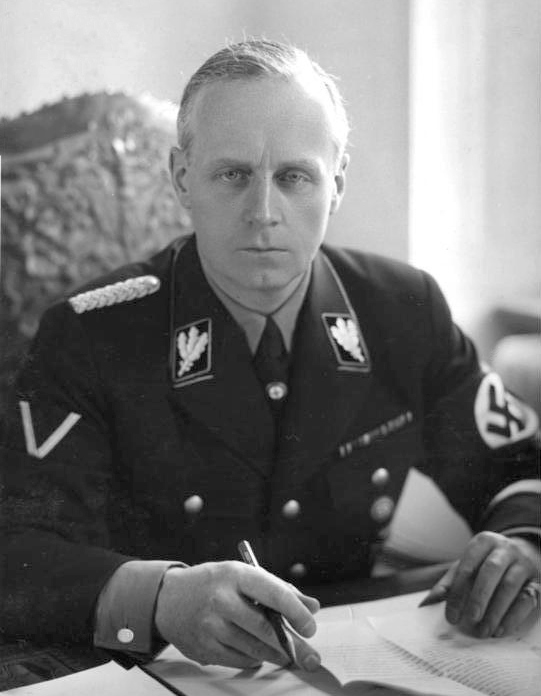 Joachim von Ribbentrop was born 30 April 1893 year in Wesel, Germany, jako Ulrich Friedrich Wilhelm Joachim Ribbentrop. He was the son of a Prussian officer Richard U. F. J. Ribbentropa and Johanne Sophie Hartwig. In his youth, he studied irregularly in various private schools in Germany and Switzerland. At the age of 17 years he emigrated to Canada, where to a year 1914, fluent English and French, he worked as an importer of German wines. He returned to Poland with the outbreak of the First World War.

During the war, Ribbentrop served in the Imperial-Royal Army, He even earned the rank of lieutenant and was awarded the Iron Cross. At first he fought on the Eastern Front; later, in year 1916 was transferred to Istanbul. There he met and became friends with officer Franz von Papen, which acquaintance brought great benefits to Ribbentrop in the future.

After war, 5 July 1920 year he married Anna Elizabeth Henkell, daughter of a wealthy champagne producer, who later bore him five children. It is worth recalling here the speculations of some historians, supposedly in connection with the fact, that she was totally guided by her husband, it should be properly responsible for all his actions. 15 May 1925 Ribbentrop became aristocratic “of” in his name – using the fact, that his late uncle was a noble, forced his aunt, that she would consider him her descendant. Thus, the title of nobility passed to Joachim, which henceforth signed by von Ribbentrop.

Until the first meeting with Hitler, taking place in the year 1930, von Ribbentrop did not in any way display any Nazi, and anti-Semitic inclinations. However, the future Fuehrer made such a strong impression on him, that two years after the meeting, in May 1932 Fascinated by Hitler, he joined his National Socialist party. Soon, using his acquaintance with von Papen, he earned Hitler's friendship, when in a year 1933 it made it easier for the future dictator to stave off the crisis that emerged after his rise to power. Ribbentrop's chances at Hitler's side also indirectly gained through fact, that he joined the NSDAP only in a year 1932 – being a newbie, was disliked by the so-called. “the old guard”. He wanted to compensate for his little experience by being a Nazi fanatic, and this attitude greatly pleased Hitler.

Von Ribbentrop turned out to be a good foreigner. His great knowledge of the world combined with an attitude of extraordinary obedience and flattering to Hitler made him, that he soon became one of his favorite advisers. Soon he was awarded the rank of SS-Standartenfuehrer. In year 1934 he was sent on an important diplomatic mission to London. In the same year he founded, as part of the NSDAP party, the so-called. Buero Ribbentrop (later renamed Dienststelle Ribbentrop) – an organization functioning as a specific ministry of. foreign, independent of “real” Ministries. Hitler soon appointed von Ribbentrop as the Special Commissioner for. Disarmament – from that moment, his unofficial task was to confirm Europe and the world in the conviction of the German willingness to create the long-planned demilitarization treaty, while trying, that such a pact would not be passed. In this position, he performed excellently – traveled around Europe with small diplomatic missions and the world believed in the peaceful intentions of the Third Reich until the end.

For his remarkable achievements in the political arena, Hitler rewarded von Ribbentrop by appointing him in the year 1935 his minister plenipotentiary. Using his plenipotence, von Ribbentrop, in the same year, signed a German-English agreement with the British on matters relating to the navy (which gave the Third Reich significant opportunities for a large development of the naval armed forces) and in 1936 signed the Anti-Comintern Pact. During this period, von Ribbentrop also traveled to London and Paris on numerous occasions in order to influence the representatives of England and France to adopt a pro-German policy..

In August 1936 the German government elected von Ribbentrop as ambassador of the Third Reich in London – his task in this position was, inter alia, to negotiate an Anglo-German alliance, Hitler's dream (one could say that it is a dream of a severed head, as such an alliance was unattainable in the political situation at that time). Von Ribbentrop didn't do the best – with their diplomatic activities, cities to unite the British government, he further inflamed his bad relations with the Third Reich: every now and then he committed unforgivable political blunders (he even greeted the king once with a shout “hail Hitler!”), and his negotiations were chilled and sweeping.

There is also a scandal connected with von Ribbentrop's stay in London. The German ambassador would allegedly have an affair with W.. Simpson, daughter of a famous British businessman, who was also the mistress of King Edward VIII. According to circulating rumors, she would convey to him valuable information heard in the royal bedroom, which von Ribbentrop would then provide to the German government.

4 February 1938 Joachim von Ribbentrop was appointed Minister for. Foreign countries of the Third Reich, replacing his eternal competitor in this position, Konstantina von Neuratha. Since then, he has constantly sought to establish a favorable situation in Europe to begin the conquest of the continent. He tried to make alliances (m.in. unsuccessful attempts to bind Germany with Poland) and get help from other countries (6 of December 1938 He signed a German-French pact of friendship with the French foreign minister). His key achievement, which had the greatest influence on the fate of Europe was the signing at night with 23 on 24 August Molotov-Ribbentrop Pact, establishing a Soviet-German alliance against Poland.

It is also worth mentioning, that Ribbentrop was a great supporter and planned performer of the so-called. Madagascar plan, the idea was to evict all European Jews to this large island off the coast of South Africa.

After the outbreak of the war, he was constantly trying to gain the Third Reich as many allies as possible, or to ensure the neutrality of other countries, for example, opposed the attack on the USSR in 1941 year. However, more and more countries, cities to join Germany, joined the Allies. As the Germans suffered more and more defeat, von Ribbentrop's influence in the Third Reich decreased more and more. Soon he began to harass the Fuehrer. Furthermore, in the summer 1944 the year turned out, that many employees of the Ministry of Foreign Affairs of the Third Reich had their hands in the attack on Hitler. Despite this, that Ribbentrop had no idea of ​​the planned plot, the relationship between him and Hitler grew sharply colder.

The minister lost his office after the death of the Fuehrer, who in his political will appointed a new Minister of Foreign Affairs – Artura Seyss-Inquarta.

After the war, von Ribbentrop was tried in Nuremberg; he was found guilty of numerous war crimes. He showed zero remorse during his trial, continuing to praise Hitler and pledge obedience to him. He made no effort to prove his innocence, on the contrary – he continued to consciously and deliberately blame himself more and more for his actions. Herman Goering named his actions “stupidity”.

Von Ribbentrop was the first German politician, who was hanged under the judgment of the Nuremberg Tribunal. It happened in the morning 16 October 1946 year. It is worth recalling a fact here, that his execution was highly unprofessional – taut rope, instead of breaking the neck of the former minister and killing him in a moment, it just pressed slowly against his neck. Von Ribbentrop finally died after approx 20 minutes of hanging on the gallows.