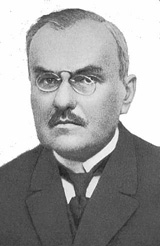 In retrospect, it is certain, that the creator of the zloty increased it himself by bringing our economic and financial conditions to the Western European standard. He burdened the country with an inflated budget, and keeping the zloty high, it raised production costs and weakened Poland's export capacity [no] while inhibiting the import of unnecessary things from abroad. Grabski counted on the natural resources of the country, meanwhile, a heavy crop failure in years 1924 i 1925 cut his balance of trade and payments. Still the budget was balanced, even with an excess, but it was increasingly difficult to find the strong foreign currencies needed to make purchases. When the prime minister in late October 1924 r. presented a budget of nearly two billion, Głąbiński rightly questioning his calculations, quite unfoundedly criticized the government's submission to foreigners in foreign policy. Grabski was furious at this professor's criticism and demanded parliamentary satisfaction. Left with minorities passed a resolution, that the government's foreign policy corresponds to the interests and dignity of the Republic of Poland. This episode extended Grabski's rule by one year, because it was impossible to come back under the rule of "Chjenopiast". The office tilted to the left, then right again and stayed in the middle – over the Seym.

The prime minister tried to gain personal communication with both wings: pulled in [17 November 1924 r.] Thugutt for the position of deputy prime minister, then his brother Stanisław to the Ministry of Education. These two bold-minded politicians agreed on the language laws for the Eastern Borderlands (actually St.. Grabski dragged Thugutt onto his platform). From a state point of view, it seemed desirable, that Ruthenians and Belarusians could communicate in their own language with offices and the court, and that in mixed districts Polish children would come closer to non-Polish children, the higher culture would probably influence the lower one. However, this institutionalization of schools in Galicia and the Eastern Borderlands was badly received by the local majority, eager to break away from. Stanisław Grabski tried separately, because of my brother's efforts to get a US loan, bargain from the Jews a declaration of loyalty to the state, but his own club saw too much compliance in this, because, was said, every citizen without bargain should treat his country loyally.

Return of Minister Skrzyński to the Briihlowski Palace (i.e.. MSZ services) marked a certain revival in diplomacy. In the immediate vicinity, it was possible to smooth out the friction with the Czech Republic. After several months of negotiations, Edward Benesz was signed in Warsaw 23 April 1925 r. a conciliation and arbitration treaty and a liquidation agreement in matters related to the division of Cieszyn Silesia. Later, other arrangements aimed at mutual rapprochement and cooperation arrived. Minorities have been better protected on both sides, than provided for in the Treaty of Versailles 1919 r. The consideration of the Germans induced them to reach an agreement and consent, raising their head, m.in. in Gdańsk after the recent humiliation, especially since in the West, economic factors were increasingly calling for the Reich to join the League of Nations, and they were echoed by English pacifists (especially at the Labor Party). Skrzyński in October 1925 r. at the England conference, France, Italian, Belgium, Czechoslovakia and Poland in Locarno (Switzerland) he responded favorably to the convention, which was then signed in London (1 XII), and still called the Treaty of Locarno. Here, for the first time, the guarantee of the Reich's western borders was distinguished from Versailles from the guarantee of the eastern borders; only those were guaranteed by England and Italy. However, in the event of a dispute between Germany and Poland or the Czech Republic, conciliation and arbitration procedures were provided for, or, ultimately, diplomatic intervention by the League of Nations. Admittedly, France, Poland and Czechoslovakia at the same time guaranteed themselves aid in the event of an attack by Germany, but the "spirit of Locarna" proclaimed by Skrzyński could not calm them down, what they saw, that Britain and Italy are withdrawing from protecting Poland's inviolability, to which the Treaty of Versailles applied them.

There was no threat of open attack from the east. The one created in 1924 r. Border Protection Corps; after all, from the attitude of some Ukrainian and Belarusian MPs and the Independent] You could see the Peasant Party, that the Bolshevik propaganda effectively penetrated the peasant spheres in the Borderlands. There was some kind of contraction against these influences – at least in the sphere of the Polish people – regulating cooperation between the Church and the State. The constitution recognized Catholicism among equals (and not only tolerated) confessions the leading position. Stanisław Grabski as the creator of the Roman concordat on 10 February 1925 r. (which has entered into force 2 WE). It was agreed, inter alia,, that secular authorities may oppose appointments in the Church for political reasons, that religious education will be obligatory in schools; until the goods are returned, which Russia took from the Church, Austria and Prussia state to pay out [was supposed to] salary of the church hierarchy. Rome agreed to cover the goods of the dead hand with the land reform. Concordat, despite harsh criticism from anti-clericals (K. Czapiński from PPS and J. Putek from Liberation), it has been ratified by a large majority (181:110).