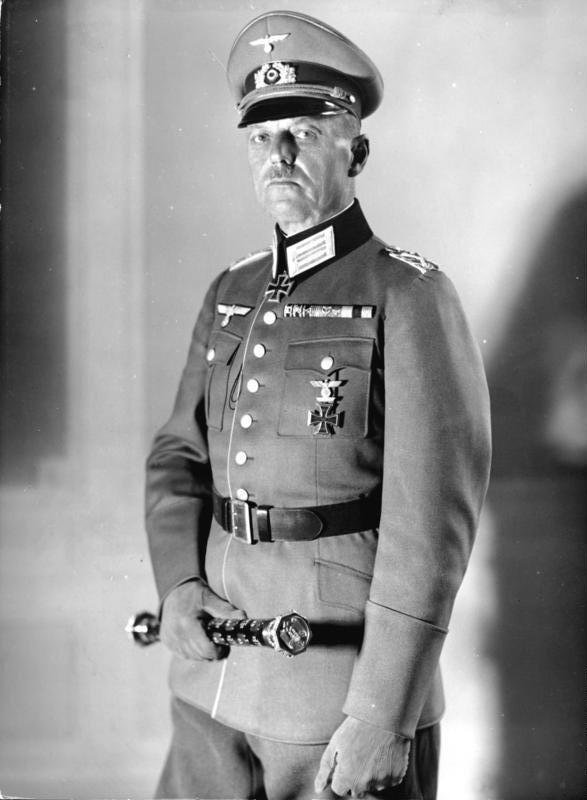 Karl Rudolf Gerd von Rundstedt was born 12 of December 1875 in Aschersleben in Saxony-Anshalt. His future military career was greatly facilitated by the fact, that his father was famous, meritorious general. At the age of eleven, he enrolled in a gymnasium, and after four years, in year 1891, he entered the Prussian cadet school. From 22 brand 1892 he served in the rank of ensign 83. a Prussian infantry regiment stationed in Kassel. Only a year later he was given the rank of second lieutenant. The following year he was promoted to the rank of lieutenant. W 1902 He married the daughter of major von Goetz, which, to an additional degree, connected him with the elite of the German army. W 1904 he became a student of the renowned Military Academy, from where, after three years of study, he joined the General Staff. 24 brand 1909 he was promoted to the rank of captain. W 1912 finished work in the General Staff, having been assigned to the field service – he soon took command of 171. infantry regiment in Chodzież (then Kolmar).

During the First World War, von Rundstedt, quickly promoted to the rank of major (28 November 1914 year) served in the general staff, stationed both on the Eastern Front (in Turkey) and western (in France). He ended the war as a staff commander in a division. For his merits, he was awarded the Iron Cross of the first and second class.

After the establishment of the Weimar Republic, von Rundstedt joined the 1919 years to the newly formed Reichswehr. The twenties were for major von Rundstedt a period of laborious climbing higher and higher the ranks of his military career. 1 October 1920 he was promoted to the rank of lieutenant a 1 February 1923 he was promoted to the rank of colonel. 1 May 1925 years he received command of 18. an infantry regiment stationed at Paderborn. Finally, after thirty-six years of service in the army, he received the rank of general, to which it was promoted 1 November 1927 year. As a major general, he took command of 2. Cavalry Division in Wrocław, which he held for less than a year. Already 1 brand 1929 Another promotion awaited him in the year, to the rank of lieutenant general. With the beginning of the year 1932 received command of 3. Infantry Division. 1 November of that year, he obtained the prestigious rank of General of Infantry.

After Hitler came to power, he originally opposed the policies of the new dictator, however, this reluctance has faded with the passage of time. In October 1938 year as chief of staff of Gruppenkommando IV, he took part in the capture of the Sudetes. A month later, in November, in opposition to the loud provocation directed against Werner von Fritsch, he went into a state of rest. However, he returned to the army after a few months, when it is in august 1939 year, just before the attack on Poland, he took command of the Army Group “South”.

At the head of this grouping, he took part in the September campaign 1939 year. His Army Group attacked Poland from the southwest, heading from Lower Silesia and Slovakia to Lesser Poland and Mazovia. She participated in the capture of Warsaw. For his merits during the aggression against Poland, he was awarded the Knight's Cross.

After the campaign is over, GA “South” was renamed 8 October on “Supreme Command East”. The same month, still under the command of von Rundstedt, was transported to the West and its name was changed to Army Group “A”.

From Rundstedtowi, as part of the operation “Fall yellow” in May 1940 The year was entrusted with leading the attack through the Benelux countries and invading France from the northwest. The operation proceeded without much resistance from the enemy.

It is to von Rundstedt that the French may owe the successful evacuation to the British Isles of their doomed troops. Army Group Commander “A”, not trusting the strength of the armored forces, he did not allow Guderian to perform a quick maneuver aimed at eliminating the besieged French troops. He ordered to wait, until the infantry comes to help the tanks. Thanks to this, the French managed to break through to Dunkirk. Next, I don't know why, von Rundstedt did not allow the evacuating troops to be attacked. He then explained himself, that such a maneuver was forbidden by Hitler, who feared the aggravation of relations with Great Britain, still hoping to sign a peace with her. However, historians say, that the Fuehrer had left von Rundstedt a free hand in this matter.

For his merits in the fights during the aggression against Poland and the attack on France, from Rundstedt, 19 July 1940 year, was promoted to the rank of field marshal.

After the fighting in France ended, Field Marshal von Rundstedt took up the development of operational plans “sea ​​lion” (invasion of the British Isles). However, Hitler changed his mind, and he decided to attack the Soviet Union in the first place. Operation “sea ​​lion” therefore it was postponed for an indefinite period; the idle von Rundstedt was appointed head of the occupying forces. He was also entrusted with the task of strengthening the coast in the conquered territory.

During the aggression against the Soviet Union, Field Marshal von Rundstedt transported to the east fought again at the head of the Army Group “South”, on the return of the GA that he had commanded “A”. They were under his command 52 infantry divisions and 5 armored divisions. A task set for the Army Group “South” was the capture of Ukraine and the capture of the oil-rich Caucasus. Von Rundstedt's march into Russia was relatively slow at first. His first major success was the capture of Kiev, after having surrounded the city. Stalin forbade the Red Army to leave the redoubt despite this, that her defense from above was doomed to failure. German troops, having captured Kiev, they were taken captive until 665 thousand (!) prisoners.

After capturing Kiev, von Rundstedt headed towards Kharkov and Rostov-on-Don. The field marshal was a stiff opponent of continuing the offensive during the coming winter, however, his voice did not have much impact in the German general command. In November, von Rundstedt had a heart attack, however, he refused to be hospitalized, at all costs desiring to get the said Rostov n. Don before the severe frosts. He reached the city 21 November, however, soon his troops were rejected by the Soviet counteroffensive. Field marshal, not wanting to risk the total defeat of the troops subordinate to him, he decided to retreat to the east. This act angered the frustrated Hitler so much, that he immediately dismissed von Rundstedt as commander of the Army Group “South”, replacing him with Field Marshal Walther von Reichenau.