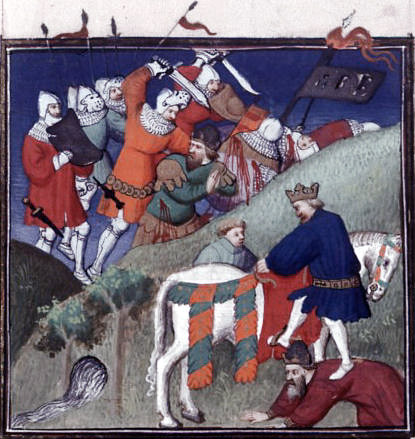 Z Arabami Bizantyńczycy rozprawili się ostatecznie w wielkiej bitwie z 863 r., and such rulers, like Basil I. (867 – 886) i Konstantyn IX Porfirogeneta (913 – 959), they ousted them entirely from Asia Minor. The next century is the time of the glory and power of the empire, which culminated in the reign of Basil II (976 – 1025). The Seljuks brought an end to the idyll – a tribe of Turkmen origin derived from the Altai-Mongolian group. It took its name from the ruler of Seljuk – ancestor and founder of the dynasty, which in the mid-10th century. he united many families under his rule. Seljuks inhabited the areas of Central Asia, they converted to Islam fairly early and in accordance with its doctrine, and in the absence of land for pastures, they began to move west. They took control of Iraq with Baghdad; here the ruler of Togrul Beg received the title of caliph (secular and religious leader of the Muslim community), and his successor, Alp Arslan, conquered Syria and Armenia, having then entered Anatolia. In the historic battle of Manzikert (1071), near Lake Wan, he defeated the army of Emperor Roman IV Diogenes and took him prisoner. From this year, we date the uncontrolled influx of semi-nomadic Turkish tribes to the Anatolian plateau.

The victors began to disperse across Anatolia, sometimes surrendering to local Byzantine rulers, sometimes serving the emperor (in return, they were given a fief) or creating their own state organisms. The strongest was created after lconium was obtained (Konya) we Frygii, although the rulers of Cappadocia and Malatya Danishmenids also gained importance. The Rum Sultanate was established in Konya, which takes its name from this, that he occupied the lands belonging to the Byzantines identified with the Romans. First, its capital was Nice, but due to the onslaught of the Crusaders, lands too close to Constantinople were abandoned. The Seljuks occupied vast areas, leaving the empire little territory in Asia Minor. In the period of its greatest glory, that is, in the thirteenth century (especially during the reign of Alaeddin Keycobad I.), The Rum Sultanate had access to the Aegean Sea, Mediterranean and Black. Many wonderful buildings were built in Konya at that time, and the whole country was experiencing a veritable economic boom. Ancient trade routes were restored, caravans traversed all of Anatolia, not only Turkish, but also Armenian or Jewish, for other nationalities enjoyed relative freedom in both the religious sphere, and social. It was the Seljuks who laid the foundations for the broadly understood Turkish culture, which the Ottomans would later develop. The Sultanate of Rum survived until the beginning of the 14th century., struggling with many problems. The largest of them were, as it seems, crusades undertaken by Western knights.