Phrygs and Lydians – heirs of the Hittites 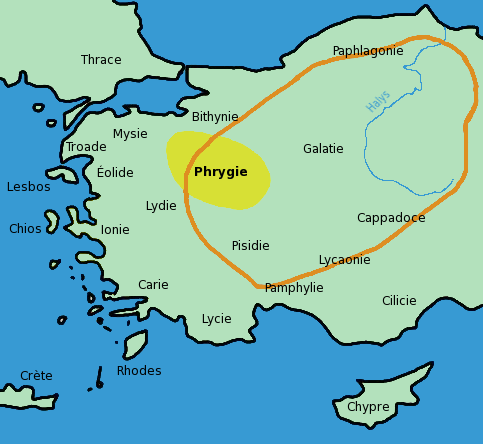 The tribes of Phrygians and Lydians flowed into Asia Minor from Thrace and Macedonia, and one can infer from Homer's Iliad, that already during the Trojan War (XII w. p.n.e.) there were several Phrygian centers in Anatolia, which filled the void created by the fall of the Hittite Empire. However, Phrygia flourished as a unified state around. VIII w. p.n.e., when King Midas ruled it many times we can meet him as a hero of Greek mythology. At that time, Phrygia reached Cilicia on the Mediterranean Sea, Euphrates to the east and to the Aegean Sea to the west. The capital of the state was the city of Gordion (100 km west of Ankary), where a huge palace complex and many other great buildings were built, the remains of which we can admire to this day (also one of the world's largest tumuli). At the beginning of the 7th century. p.n.e. Indo-European Cimmerians came here, leading to the fall of the power of the Phrygas. They attacked and sacked Gordion and over the next several decades plundered the former lands of the Phrygian state.

The Lydians took over the Phrygas, who occupied the lands in the western part of Asia Minor. Lydia began to count as the dominant political force in the region around the time of King Gyges' reign (685 – 652 r. p.n.e.), which has adopted wide-ranging expansion plans. The Lydians first of all wanted to control the Greek colonies located on the coast of the Aegean Sea, but these fiercely defended themselves. The last king of Lydia, after all (whose capital was Sardis), the famous Croesus (560 – 546 r. p.n.e.), managed to subdue all Ionian cities, and only Miletus retained complete independence under the agreement. Admittedly, Croesus raised the Lydian state to the top of its power (although the first coins in the world had already been minted here), but at the same time led to its downfall. After the prosperity in the west, he decided to anticipate the Persian attack, who after taking over the Medes, lying between Lydia and Persia, bordered on the state of Croesus. Expedition with 546 r. p.n.e. it was unsuccessful, and the emboldened king of Persia, Cyrus, followed the retreating Croesus and completely smashed his army at the Battle of Sardis. The road to the capture of Asia Minor was open to the Persians.